Celebrate the Feast of Trumpets

These are the feasts of the LORD, even holy convocations, which ye shall proclaim in their seasons.

In the seventh month, in the first day of the month, shall ye have a sabbath, a memorial of blowing of trumpets, an holy convocation (Lev 23:4,24)

A CALL FOR ASSEMBLY

The Feast of Trumpets celebrates a special call of God to His people to assemble. The trumpet is a symbol of a specific message for a particular time.

Both Christian and Jew believe that the Messiah was to bring the message of deliverance to mankind. Jesus is identified by Zacharias as the "horn of salvation" in Luke 1:69. Messiah was to be the voice of God in the earth declaring the gospel of the Kingdom of God. The Apostle John tells us that Jesus was the word of God made flesh. He has been the word, the voice or the horn of God since before time. (John 1:1)

DAYS OF AWE AND NEW BEGINNINGS

This festival signals the beginning of an annual ten day period of time called "the days of awe" .(repentance) It includes the Feast of Trumpets and the Feast of Atonement. The days of awe provide a time for self-examination and introspection. They were to have a humbling effect on the people of Israel as indeed they should have upon us all. [They could be called the days of Humility] All of this was leading up to the celebration of the last great festival of the year, the festival of "Tabernacles." Tabernacles is by far the most joyous of annual celebrations.

It is the principle of spiritual assessment and repentance that lies behind this declaration of God through Isaiah the prophet;

Cry aloud, spare not, lift up thy voice like a trumpet, and shew my people their transgression, and the house of Jacob their sins (Isa 58:1).

Rosh Hashanah is the Hebrew name for the festival of Trumpets, meaning "the beginning." The seventh month of Tishri is what is considered the beginning of the Jewish fiscal New Year. It is also considered by Jewish sages to be the beginning or creation of the world.

"With trumpets and sound of cornet make a joyful noise before the LORD, the King." (Ps 98:6)

Originally, there were two silver trumpets used by the priests to signal the approaching pilgrimage festivals. Eventually, it appears that they were replaced by the shofar (a ram's horn) The shofar is one of the more prominent of biblical symbols. The ram's horn is very meaningful for historic and prophetic reasons. The significance of its use is found in the story of Abraham and Isaac,

And Abraham lifted up his eyes, and looked, and behold behind him a ram caught in a thicket by his horns: and Abraham went and took the ram, and offered him up for a burnt offering in the stead of his son (Gen 22:13).

This is one of the greatest sacrificial lessons of the biblical record. It is certainly one of the greatest prophetic lessons of all time regarding the coming messiah. God asked Abraham to sacrifice his own son which Abraham was willing to do but God prevented him by providing a ram in substitution for his son Isaac. This is an Old Testament allegory reflecting John 3:16:

"For God so loved the world, that he gave his only begotten Son, that whosoever believeth in him should not perish, but have everlasting life."

Every time the Christian hears the sound of the shofar, he should be refreshed in that profound redemptive lesson. The church today should make greater use of the Shofar in celebration and worship.

Finally, the Feast of Trumpets is prophetically fulfilled when the last trump sounds and the Lord returns for his people in preparation for establishing his physical Kingdom upon the earth.

For the Lord himself shall descend from heaven with a shout, with the voice of the archangel, and with the trump of God (1 Thess 4:16).

[Do not interpret this trumpet to be a gigantic solar bugle that some have envisioned.] This verse is simply speaking of a profound message of preparation being declared in anticipation of our Lord's soon return to earth in power and great glory. It is a sound comparable to what John the revelator heard in his vision while in exile,

After this I looked, and, behold, a door was opened in heaven: and the first voice which I heard was as it were of a trumpet talking with me;

The Feast of Trumpets serves to remind us of the importance of hearing the voice of God. Lord, give us ears to hear!, 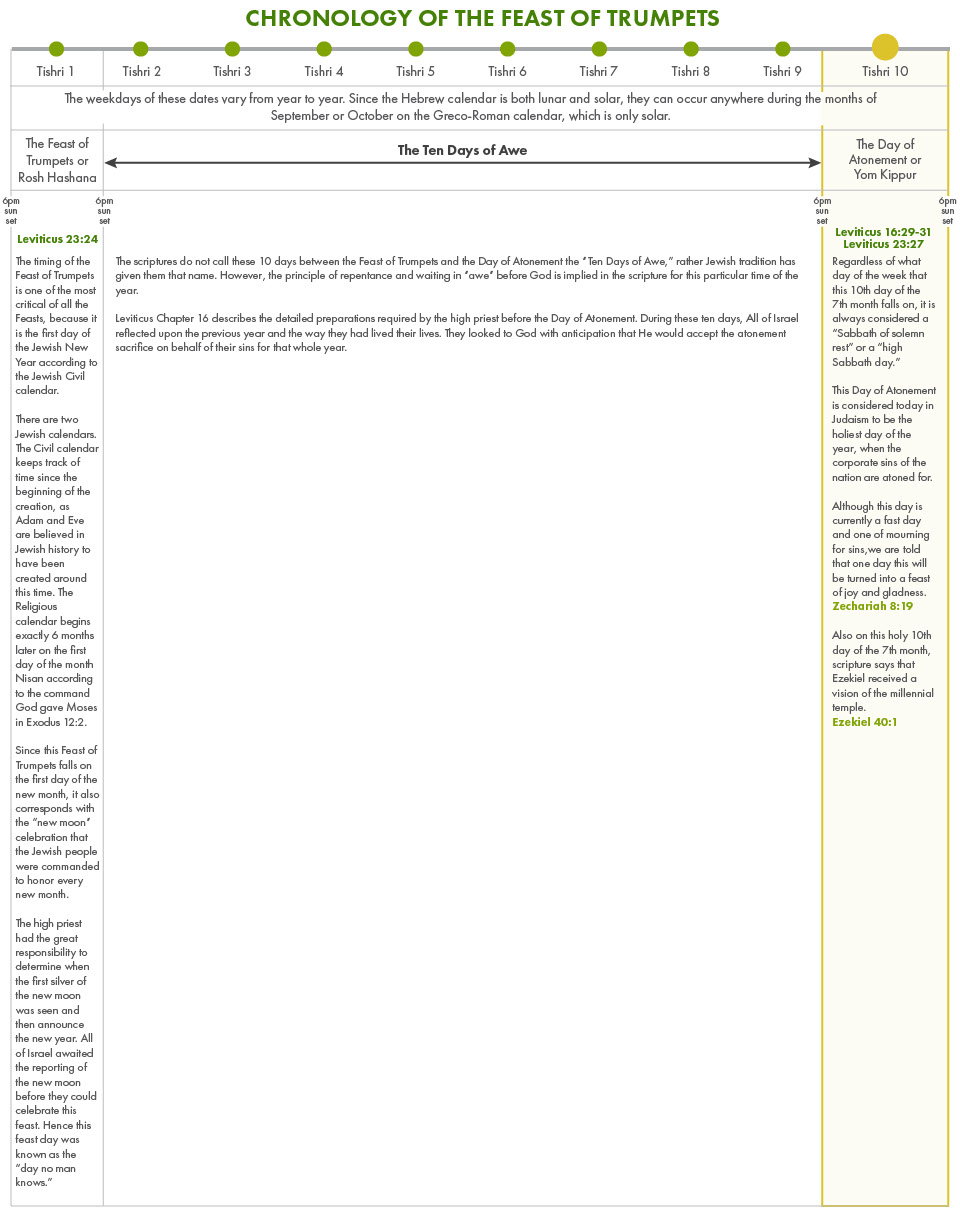